skip to main | skip to sidebar

the giant anteater has been one of my favorite animals ever since i saw one at the new orleans zoo, one of the prettiest zoos in the country. i went yesterday for the first time since hurricane katrina and could not believe my eyes when i got to the giant anteater exhibit(which it shares with the three-toed sloth) and saw that it had a baby on it's back!! it was the craziest thing i have ever seen! the male anteater was penned up in a different section but at one point the male and female met up at the chain link gate and were putting their noses together. 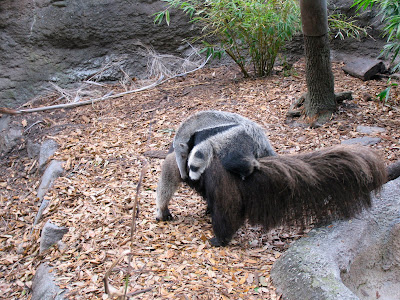 here is the baby on the mother's back--the white and black thing that almost looks like a panda head is it's left front foot, you can clearly see it's long grey snout, black eye and little round ear.
some things to know about giant anteaters: they have no teeth 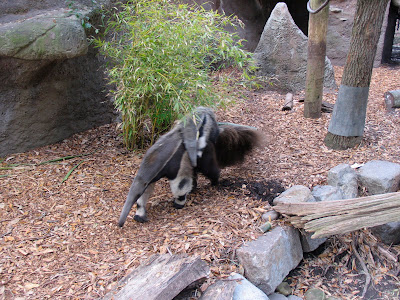 they can flick their toungues out to catch ants and termites up to 160 times per minute! 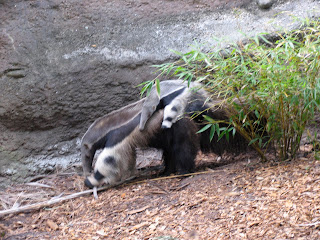 the giant anteater can weigh up to 86 pounds 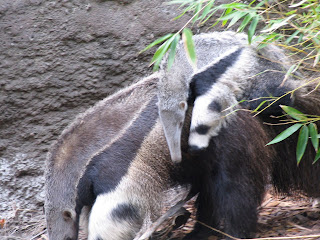 they find their food using their sense of smell, their eyesight is poor.
Posted by Laura at 8:22 AM

Email ThisBlogThis!Share to TwitterShare to FacebookShare to Pinterest
Labels: anteater

Amazing photographs! Thank you so much for sharing them. I get such a kick checking your web site and finding new pictures, art, and stories. I live in Louisiana and can ID with your comments.

Wow .. those are awesome pictures !
I have never seen one in person, they must be impressive judging from the photos !
Now that is an Unusual animal indeed !
PS .. I love your cats too !
Joy

They are so cute! I've always liked them too.

By the way, Miss Laura...your last set of photographs were beautiful. The cow was the best!:)

Wow, an anteater baby!!! Now that's something I have never seen before. So cool! I am amazed how much its foot looks like a head. "Panda head" as you said. Indeed!